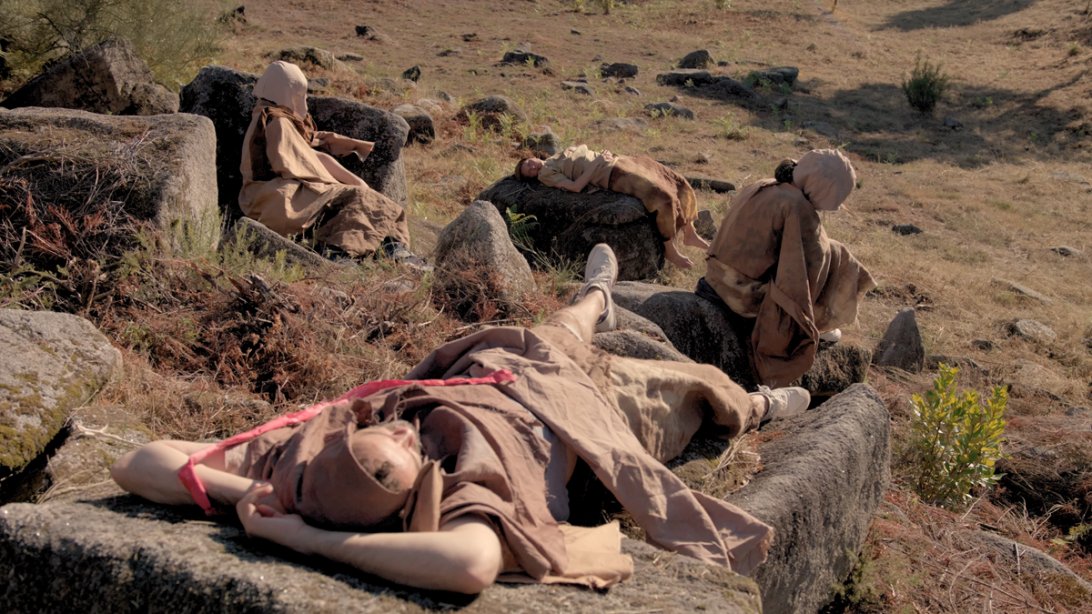 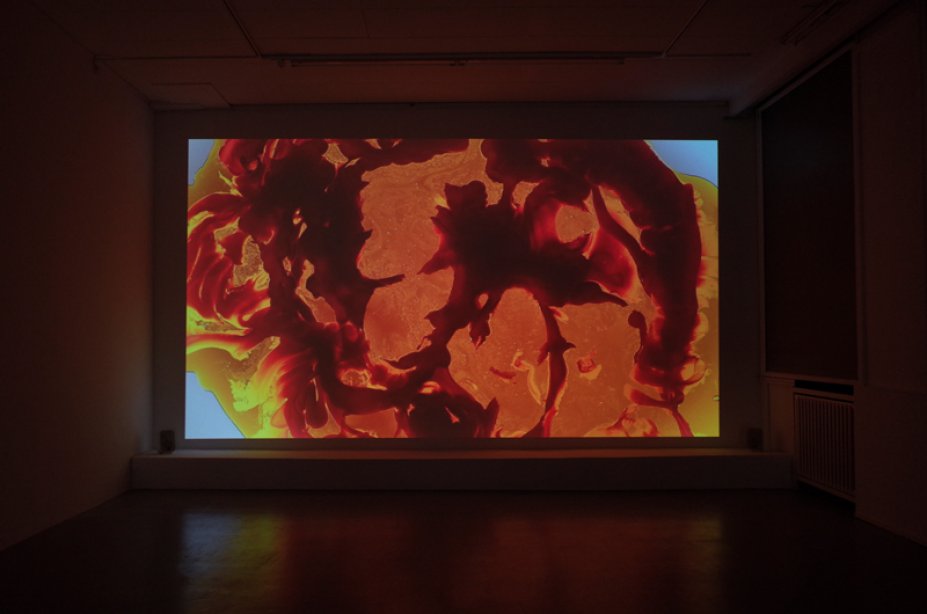 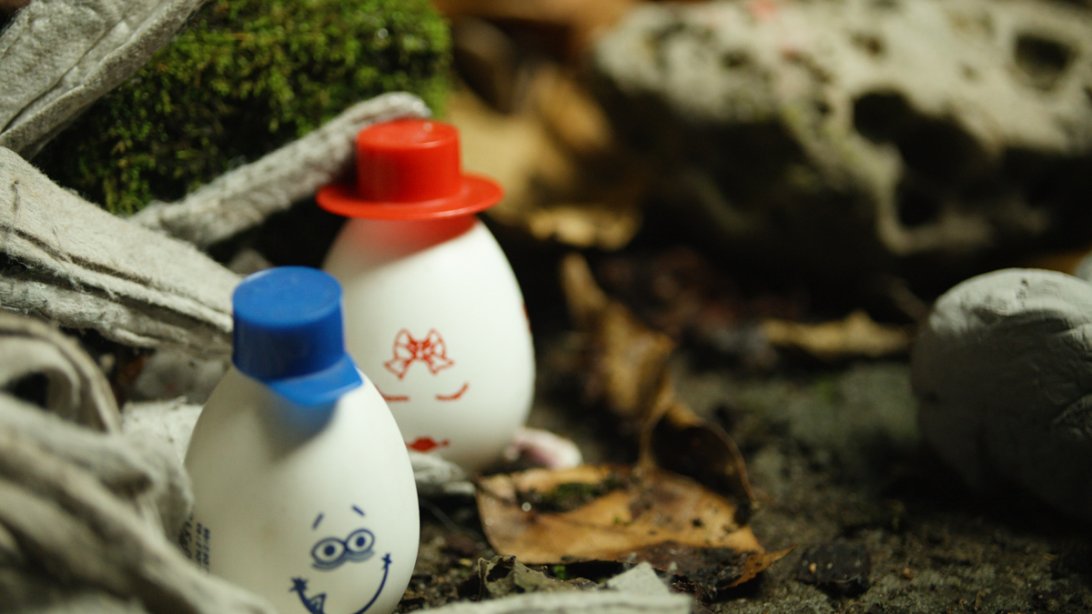 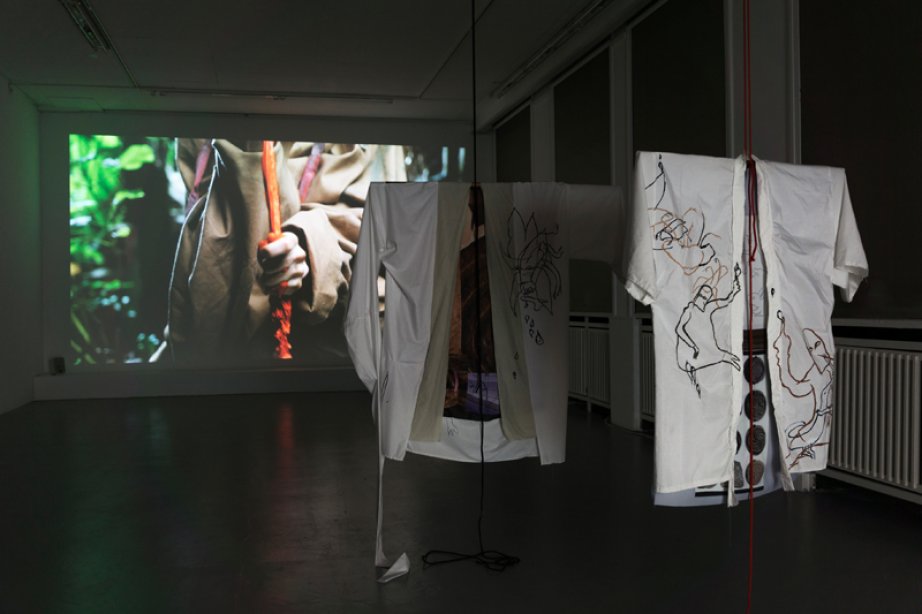 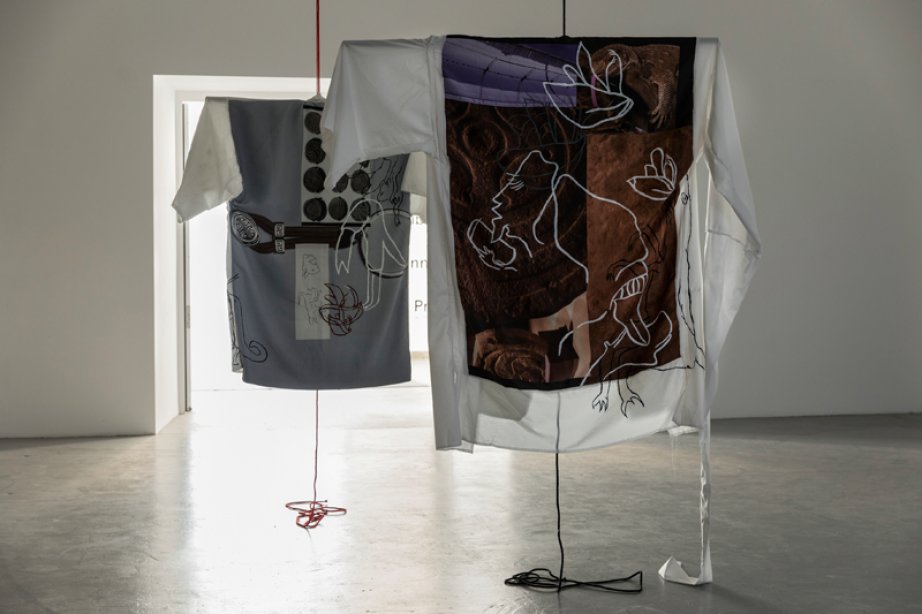 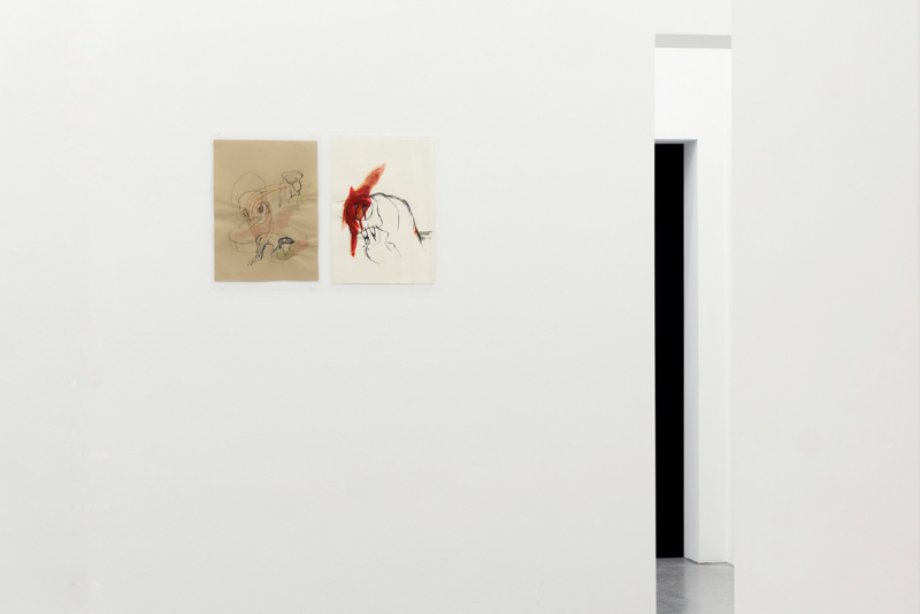 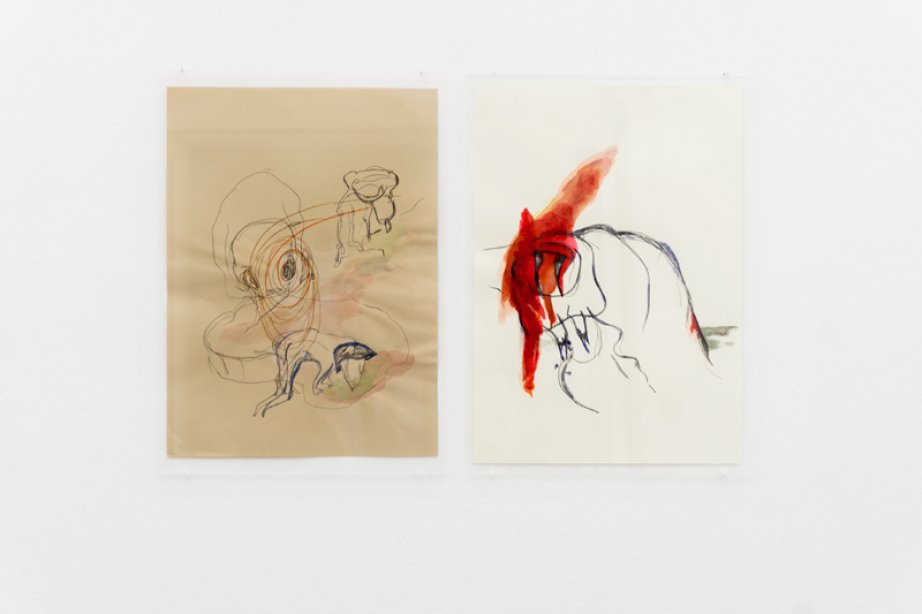 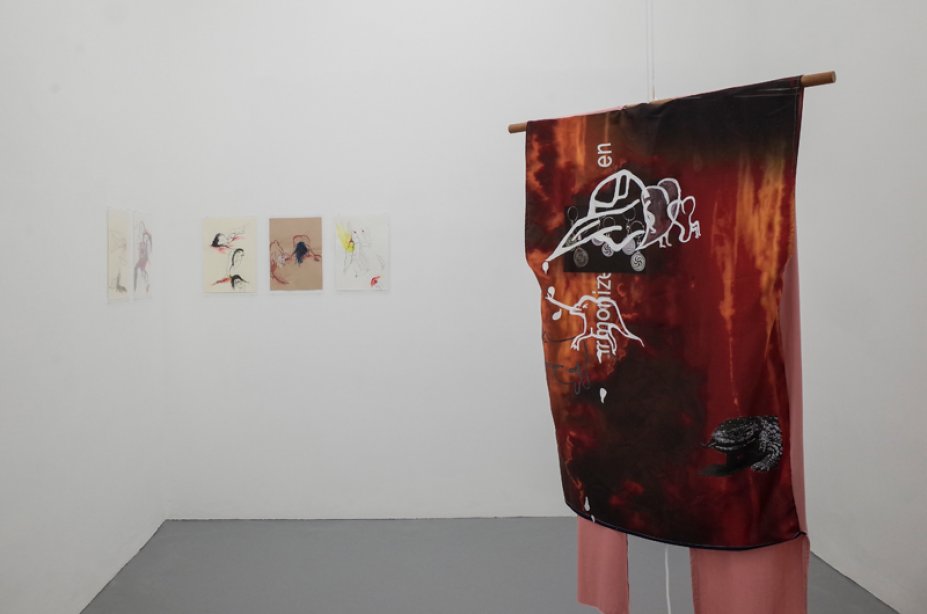 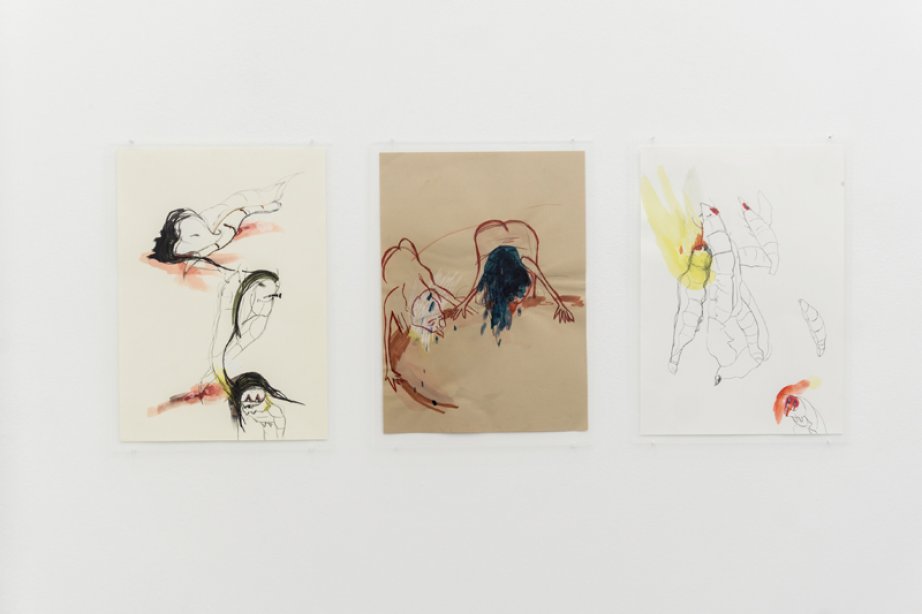 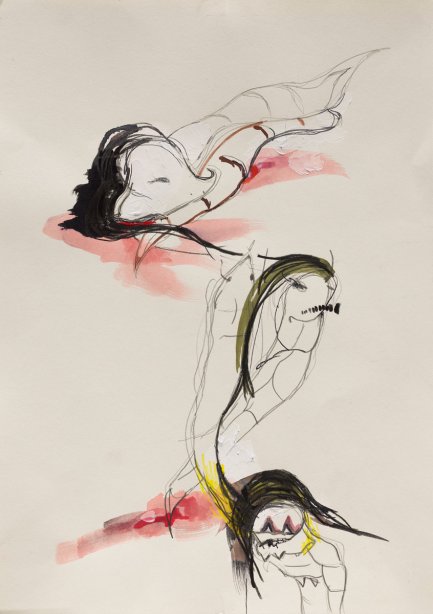 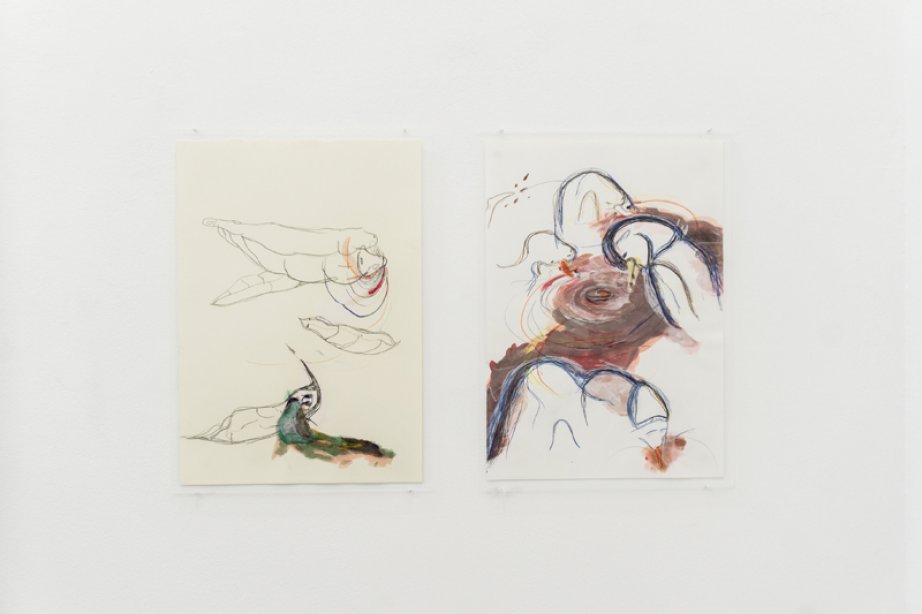 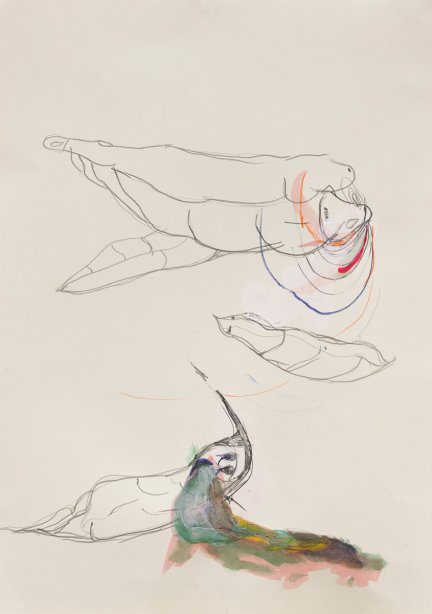 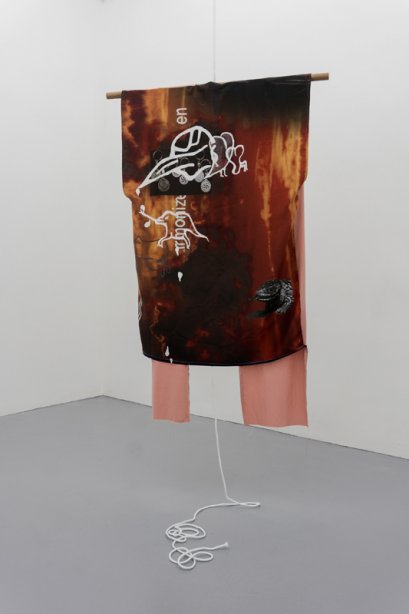 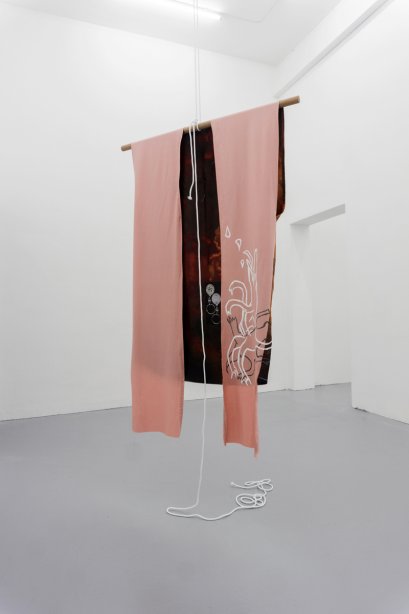 In the exhibition Flint House Lizard, Ani Schulze presents the film of the same name as well as fabric works and drawings. They form a fragmentary narrative in which the effects of the sun on our human behaviour serve as her starting point.

The film Flint House Lizard creates a surreal microcosm, in which the body, nature, and technology penetrate and influence each other. Schulze refers here to a theory by the Russian scientist and cosmologist Alexander Chizhevsky (1897-1964), which states that social development and mass movements are related to periodic cycles of the sun and are influenced by them. In the film we see an apparently natural landscape with worm-like forms and human beings, who all seem to follow those cycles. From awakening, to collective consolidation, to a final sense of apathy and isolation, the figures remain in a kind of trance state. Not everything seems anchored in this natural environment, which is largely due to the recurring recordings of the solar power plants. Progress and technology have found their way into this fictional world, whose dynamics unfold throughout the film according to the rhythm of the sun rising and setting. The events are consciously kept vague and a linear plot is not discernible. The film is shaped far more by its growing sense of tension and by the perpetual breaking down of a cohesive setting or logical narration as well as by the alternating filmmaking techniques and intense sound compositions. Through the close shots, the surfaces gain their own liveliness and refer here too to natural and artificial, yet also amorphous textures. Furthermore, the artist employs animations and a software in the same manner for generating mass movements, which broadens the film through an additional technical layer. The apparently remote world of the film preserves an intangible quality throughout the film, while the lizard functions as a constant symbol of renewal and rebirth. Both appear to follow a closed cycle.

Individual forms and elements from the filmic work can be found in the artist's drawings as well. Under the title Durst, worm-like amorphous beings can be recognised, which appear in different groupings and nevertheless seem solitary. The title of the series of drawings describes a natural and existential need that can be understood as either a driving force or as a a common basic need. With their strong directness and colouration, the works tell of permanent searching, aberration, ecstasy and the loss of control.

The textile works of the artist make reference to the appearance of gowns in the film. As the working title Montur suggests, these robes not only refer to covering the body, but also to protection from the outside. Simultaneously, they are reminiscent of a uniform, or a robe used in rituals. The textile works are printed in a collage-like manner, among others with early illustrations of sun steles and sun amulets. The lizard functions as a recurring motif on the textile surfaces too, as does the screenshot of an app that purportedly increases the production of melatonin.

On various levels Ani Schulze delves into the meaning of the solar cycles and the question of how they can be understood on a mythological, technical and scientific level. For this there is no clear answer. Rather, the individual works in their constellations prove to be fragmentary references to a process of control and contradictions as well as to permanent negotiations with oneself and others. The works further tell of an indefinite strength and thus place physical empowerment and collective action in a complex frame of reference. Both remain in a state of suspension located between cosmological signification and technical control.

the film was supported by:

Funded by Innogy Stiftung, Essen as part of the VISIT Fellowship. Parts of the narrative were filmed in
Andasol in Andalusia (one of the biggest solar power plants in the world), in the Prehistoric and
Archaeological Museum Cantabria in Santander, in a private garden in Porto and in Soajo in the north
of Portugal.

Ani Schulze (*1982) studied at the Städelschule in Frankfurt am Main, the Glasgow School of Arts and the art academies in Düsseldorf and Karlsruhe. Her works have been shown in a number of solo and group exhibitions, screenings and talks, among others at the Salzburg and Cologne Kunstverein, I: Project Space in Beijing, Kunsthalle Schirn in Frankfurt, Galerie Nagel Draxler/ travel agency gallery in Cologne, the Oberhausen Short Film Festival and Extra City Kunsthal in Antwerp.
Ani Schulze received scholarships and residencies from the Goethe_Institute China, Schloss Ringenberg, Kunststiftung NRW, AIR Antwerpen, Innogy Stiftung, Kulturamt Frankfurt and CEAAC in Strasbourg. From September 2020 she will take up a 6-month residency at the Cité Internationale des Arts in Paris.